Deprecated: Assigning the return value of new by reference is deprecated in /www/htdocs/w01a6be9/old.random-people.net/libs/Wakka.class.php on line 176

Deprecated: Assigning the return value of new by reference is deprecated in /www/htdocs/w01a6be9/old.random-people.net/libs/Wakka.class.php on line 463
 random-people.net: WishYou
Most recent edit on 2014-08-17 19:39:28 by DanielLadnar

Additions:
Wish You Were Here was developed as part of Arttours Stuttgart∞.

Deletions:
Wish You Were Here was developed as part of Arttours Stuttgart∞.

Wish You Were Here 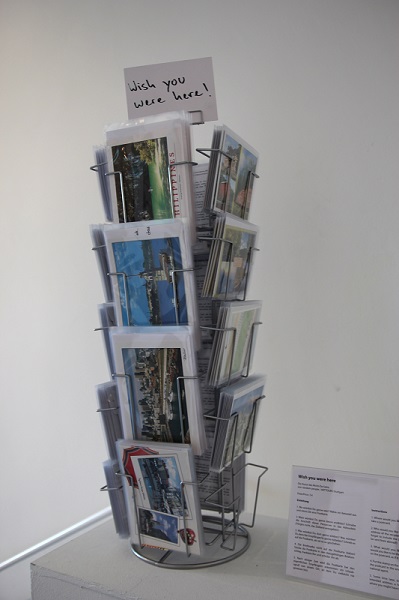 Greetings from Anywhere: Wish You Were Here invites people in Stuttgart to write postcards  but not from Stuttgart.

A selection of postcards from popular holiday destinations is available on a postcard stand. Visitors can choose a postcard, write a message to a recipient of their choice, and address the postcard accordingly. These cards are then placed in an envelope and sent to a collaborating agent in the corresponding country. The agent removes the postcard from the envelope, adds a stamp, and brings it to the local post office, ensuring that the card finally arrives at the intended address, as a holiday greeting from a place the sender never visited. Before the postcard is sent a copy is made and added to a growing archive of fictional holiday greetings.

Wish You Were Here is an exercise in the art of not being there. It offers the imagination of an ideal holiday instead of the futility of the tourists attempt to escape: instant memories for everybody!

Wish You Were Here was developed as part of Arttours Stuttgart∞.